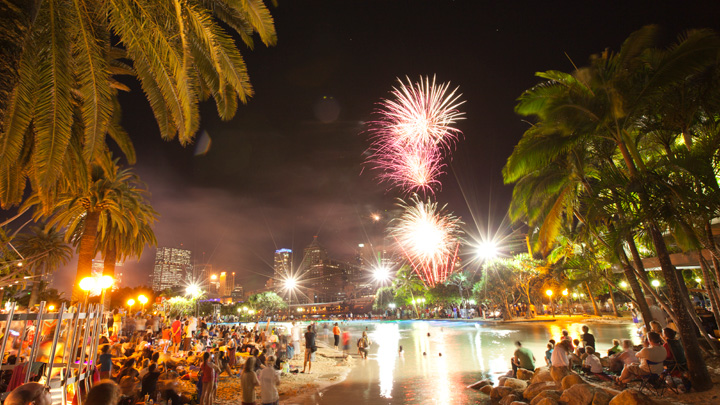 New Year’s Eve Brisbane is the biggest end-of-year celebration in Queensland, where crowds flock to South Bank and the Brisbane River for revelry, family entertainment and two explosive fireworks displays that light up the Brisbane CBD. Beginning early in the day with lots to do, there isn’t a better location to welcome the new decade.

Our accommodation near Brisbane CBD is ideal if you’re planning to celebrate New Year’s Eve in the city, offering self-contained one-bedroom studios and two-bedroom apartments for travellers, couples and families both on a budget or not. By booking with us, here is what you can start to look forward to in Brisbane on the last night of the year:

The centre of activity each New Year’s Eve, South Bank Brisbane is where you’ll find all the festivity and excitement, with locations such as the Southbank Cultural Forecourt, the South Bank Parklands and Little Stanley Street offering food vendors and stalls, buskers and street entertainers, kids attractions, live music and a nonstop electric atmosphere that starts early in the day.

When evening arrives, South Bank is also at the top of the list for one of the best areas to watch the Brisbane New Year’s Eve fireworks – especially if you want to be in the heart of the excitement. The South Bank Cultural Forecourt and the Southbank Parklands are both popular vantage points to soak up the show, which comprises of an 8.30 pm display for kids and a colourful midnight spectacle that’s well worth the wait.

If you’re looking to dine before the fireworks, South Bank won’t disappoint with its restaurant choice, being a vibrant hub of dining options that can be found all across Little Stanley Street, Sidon Street, Grey Street and more. For families with kids or couples looking to enjoy a romantic dinner date on New Year’s Eve, South Bank has something for all.

If live orchestral music sounds like the perfect addition to your New Year’s Eve experience in Brisbane, don’t miss this world-class variety concert in the huge QPAC Concert Hall, which will see the Queensland Pops Orchestra perform an assortment of popular classics with a stellar lineup of renowned theatre singers.

There will be two concert shows on New Year’s Eve 2019 at 5.30 pm and 9 pm, lasting approximately two hours with both performances culminating just in time to head off and enjoy the New Year’s Eve fireworks. Book ahead to catch this exclusive QPAC 2019 event on New Year’s Eve.

If you’re worried about not getting a good view of the fireworks, guarantee a front seat to either New Year’s Eve display with a Brisbane River boat cruise. Brisbane River cruises operate each New Year’s Eve with the unforgettable opportunity to luxuriate on an upper deck with fireworks lighting up the night sky in every direction.

Departing from Brisbane Cruise Terminal, enjoy a city tour of Brisbane that passes the famous Brisbane bridges, Kangaroo Point Cliffs, the City Botanic Gardens and more, before arriving at South Bank for the New Year’s Eve fireworks. Most Brisbane cruises will feature onboard dining and a fully licensed bar, easily offering one of the best ways to celebrate the New Year in style.

The Wheel of Brisbane and Story Bridge offer two more exciting experiences for kickstarting the New Year in Brisbane. Situated next to the South Bank Parklands, The Wheel of Brisbane and its gondolas are bookable for private hire, where an eye-level view of the fireworks promises an experience to remember for both groups and couples looking to witness the full show in amazement.

Story Bridge, located at Kangaroo Point, is popular with tourists for its Adventure Climb, which also operates on New Year’s Eve if you’re seeking an adrenaline-rushing experience and the most spectacular view of the city and its dazzling New Year’s Eve fireworks. Story Bridge Adventure Climb is easy to complete – provided you’re not afraid of heights – and even offers a toast at the summit with ample time to snap some photos.

The Wheel of Brisbane and Story Bridge NYE Climb can be booked for either the 8.30 pm fireworks, or the midnight display.

However you’re looking to spend New Year’s Eve in Brisbane, make sure you’re close to all the excitement with Hampton Court Apartments, where we offer short term stay Brisbane accommodation with a choice of one-bedroom studios and two-bedroom apartments. Comfortably self-contained, our studio apartments have all the luxuries of home for an affordable price, guaranteeing your ideal stay over New Year’s Eve 2019.

Our ensuite studios comprise of budget and renovated superior options, both featuring a Queen-sized bed, reverse-cycle air conditioning and kitchenette facilities. Our standard and superior two-bedroom apartments, ideal for up to 5 guests, are fully self-contained with additional features that include a spacious living and dining area, full kitchen facilities, two single beds and a private balcony with relaxing city views.

You can book directly today and save for New Year’s Eve – find more information by visiting Hampton Court Brisbane.