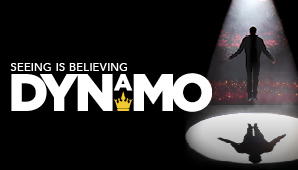 Dynamo said of the announcement of his first ever live tour of Australia: "The Australian fans have always been incredible and I can’t wait to bring the tour out there so they can experience my magic first hand. I don’t want to say too much but everyone who comes to the show is in for a big surprise!".

To date Dynamo has only taken the tour across the UK & Ireland, playing a massive 111 shows, with more than 400,000 tickets sold.

Dynamo, real name Steven Frayne, hit TV screens just over four years ago with his first series of Magician Impossible. In that short time he has quickly established himself as one of the world’s most known and most loved magicians. The series has been broadcast in over 180 countries globally, reaching a cumulative audience around the world of more than 400 million people. In Australia the shows aired on the Seven Network and have been a phenomenon.

To coincide with the tour announcement Seven have confirmed new Dynamo episodes will air on Thursday 28 July and Thursday 4 August at 10pm. Repeat episodes will also be airing on July 29 and 31 and August 5. Check local TV guides for timings.